The Trump plan for Israeli-Palestinian peace is now out in the ether, and the takes have been flying fast and furious. Unsurprisingly, and as with most things related to President Trump, there are two basic camps. One camp has deemed the plan to be the first one that embraces a realistic view of the Israeli-Palestinian conflict and offers the Palestinians a historic opportunity to improve their situation, and one that may never recur should they reject it. The other camp views the plan as completely unrealistic, born of the view that Israel can bludgeon the Palestinians into submission despite there being no evidence that this will work, and that it is not actually a peace plan designed to be accepted but a thinly veiled excuse for Israel to begin annexing the West Bank and applying sovereignty to settlements.

I am firmly in one of these two camps (no surprise as to which one), but rather than deride the plan as unserious and unrealistic and leave it at that, it is a useful exercise to take the plan’s assumptions and posit what a more serious and more realistic proposal designed to actually result in an agreement could look like. After all, whether or not the Trump plan is ever realized, it will inevitably shape the future of the conflict and Israeli-Palestinian diplomacy, and it makes sense to grapple with it in a constructive manner. To do so exhaustively would take a book rather than a thousand words, but as a start, we can examine the big picture issues of territory and Jerusalem.

One of the underlying assumptions of the Trump plan is that as circumstances change, so too should the contours of any deal between the two sides. As Jared Kushner noted in a CNN interview on Tuesday afternoon, “I’m not looking at the world as it existed in 1967. I’m looking at the world as it exists in 2020.” That strikes me as perfectly sensible, and to get anything done in foreign policy, actors have to deal with the world they have rather than the one they want. Applied to the case of what the division of territory will be between Israelis and Palestinians in the West Bank, there is a solid argument to be made that irrespective of the precise borders before June 1967, today’s circumstances dictate that significant changes be made. Without litigating the fairness, equity, or legality of more than 650,000 Israelis living over the Green Line, with about 450,000 of them in West Bank settlements, the fact is that they are there, and evacuating all of them would be somewhere between Herculean and impossible.

The obvious answer to this is to figure out a way to incorporate as many of those settlers inside of Israel proper once the map is redrawn, but in a way that still allows for a viable and contiguous Palestinian state. The Trump plan approach is to avoid having to figure out the answer to this problem, and instead sees Israel effectively annex every spot of West Bank territory where there is a settlement. This includes not only the large blocs along the Green Line, but far-flung settlements deep inside the West Bank, which on the Trump map become enclaves of Israeli territory. Those enclaves then get access roads and security buffer zones that crisscross the territory designated for a Palestinian state, and the end result is a map that takes into account the Israeli circumstances on the ground without considering any other variable.

A realistic and implementable version of dividing up territory while taking into account facts on the ground would look very different. Drawing a map that incorporates 80% of those Israelis living over the Green Line would construct a border around the five large blocs that sit right on the Green Line and incorporate less than 5% of the West Bank into Israel proper, as opposed to the 30-35% of the West Bank that the Trump plan envisions. While I would not favor this choice, one could even create a single enclave for Ariel, the fourth largest Israeli city in the West Bank and the only one beyond the Green Line blocs, as opposed to the fifteen enclaves that the plan’s “conceptual map” lists and the many more that an actual map would have to include to incorporate every current West Bank settlement.

A realistic and implementable version of dividing up territory while taking into account facts on the ground would recognize that incorporating Ma’ale Adumim into Israel will make it maximally inconvenient for Palestinians who want to travel between Bethlehem and Ramallah, or the southern and northern West Bank, but that imperfect tradeoffs will inevitably be part of any arrangement. There is nothing realistic or implementable about the system of access roads, bridges, and tunnels that the Trump plan lays out or the enormous Israeli security presence that it would require in order to keep every single settlement precisely where it is.

A realistic and implementable version of dividing up territory while taking into account facts on the ground would acknowledge that, as Israelis are fond of pointing out, there are consequences to rejecting more generous offers and of being the weaker party with less leverage, and perhaps that means land swaps that are not precisely even in terms of quantity and quality. It would not, as the Trump plan does, hand Israel some of the best and most fertile agricultural land in the West Bank in return for some dismal parcels in the Negev while also reducing the size of the Galilee by redrawing the border to put current Israeli citizens who happen to be Arab inside of Palestine. 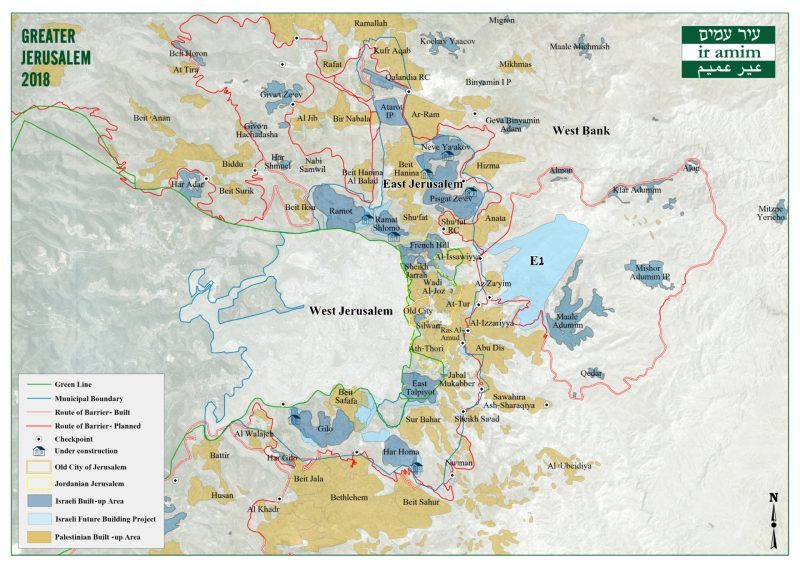 On Jerusalem, the Trump plan again employs its notion of dealing with current rather than past circumstances, but rather than taking it to the extreme, it simply gets it wrong. The plan envisions a Palestinian capital in Abu Dis, Kufr Aqb, and the Shuafat refugee camp, which is interesting off the bat for two reasons: first, Abu Dis is not part of the current Jerusalem municipality while Kufr Aqb and Shuafat refugee camp are, and second, those three neighborhoods are not actually adjacent to each other. The plan highlights those areas because they are all beyond the security barrier, and thus they are easy to separate out and maintain the position that Jerusalem remains united.

One problem with this is that none of these areas are actually Jerusalem in any meaningful way beyond semantics. When Israel redrew the Jerusalem municipal boundary following the Six Day War, it did not only incorporate the six square kilometers containing the Old City and the Holy Basin that the Jordanians defined as East Jerusalem; it instead annexed an area of 70 square kilometers. Thus, 28 Palestinian villages that were never considered by anyone to be part of Jerusalem suddenly became part of the municipality. Viewed through this lens, the Trump plan wants to take the circumstances of drawing an absurd municipal boundary under which Kufr Aqb and Shuafat refugee camp are now “Jerusalem” and use that as a capital in the city, while pretending to ignore the internal contradiction of removing neighborhoods that Israel claims are part of Jerusalem and still claiming not to have divided the city. Either the Trump plan is keeping the city united, in which case it cannot spin these neighborhoods off for a Palestinian capital in Jerusalem, or it is acknowledging that these neighborhoods are not actually Jerusalem and thus it is not granting any real Palestinian connection to the city. What it cannot do is claim both of these things simultaneously depending on which side is asking, despite its valiant efforts to do so.

But the other problem is that the Trump plan’s section on Jerusalem doesn’t actually account for the changed circumstances on the ground at all. It is keeping Palestinian neighborhoods inside of Israeli Jerusalem where there are negligible or no amounts of Jews, from Issawiya to Beit Hanina to Jabal Mukkaber. Dealing with a 2020 world rather than a 1967 world means making these neighborhoods part of a Palestinian capital in Jerusalem, rather than keeping them for Israel for no other reason than to maintain the claim that Jerusalem is remaining united and despite the fact that these neighborhoods have nothing to do with Jewish or biblical Jerusalem. A realistic and implementable version of the Trump plan for Jerusalem would, as one activist in the city brilliantly suggested to me last week, look at the precise spots that Israel places roadblocks on Yom Kippur to divide the Jewish and Arab sections of the city, and use that as a basis for where an Israeli capital and a Palestinian capital should be.

If the Trump plan looked more like what I just outlined, there is a conceivable scenario in which it could serve as the basis for negotiations. Supporters of a two-state outcome could pocket the concession that Trump made by describing his plan as such and work toward figuring out a viable and implementable solution, using some of the plan’s vision and assumptions as a jumping-off point. But that is not what this plan does, and it is a mistake to try to work within its impossibly restricting confines.

The Trump plan was sold as, in its authors’ words, “the best, most realistic and most achievable outcome for the parties.” This is sadly one of the most misleading and hyperbolic sentences in a misleading and hyperbolic plan. It is also apparent that the Trump team does not view the plan as a suggestion, but as a take-it-or-leave-it, as-is plan for Israeli-Palestinian peace, and that in itself is what renders it impossible to work with beyond being something that can be imposed with the fury of a thousand tweets. Instead of a chance to cajole folks on all sides to reconsider some of their convictions and sacred cows, the construction and release of the Trump plan will be the fuel for even more damaging developments. Perhaps the aphorism about never missing an opportunity to miss an opportunity needs to be updated.