In the aftermath of the Trump plan’s release, the concept of realism again took center stage due to the way the plan was framed. Both Trump administration and Israeli government officials presented the plan as the “realistic two-state solution,” taking into account the situation on the ground, the fact that Palestinians as the weaker party would have to temper their expectations, and that there are some things – such as moving people from one place to another – that are inherently unreasonable. The sales pitch for the Trump vision has doubled down on this notion, stressing that if Palestinians would accept that the pre-1967 situation is never coming back and that this is the best currently available to them, they can begin negotiations that will result in a Palestinian state. Anyone who maintains that the model that has historically been recognized as a viable one for two states – 1967 borders adjusted with 1:1 swaps and two capitals in Jerusalem – remains the only path forward to a negotiated agreement is now dismissed as tragically and delusionally living in the past, and unwilling to recognize what is truly realistic in this day and age.

Along the way, however, an interesting development has occurred. Despite the fact that the Trump plan extends sovereignty to every Israeli settlement – an element that should make the plan even more attractive to the Israeli right following Tuesday’s Israeli Supreme Court ruling striking down the Knesset law retroactively legalizing settlements built illegally on Palestinian private land – the greatest opposition to the plan inside of Israel is coming from settler leaders. While some paint their opposition in purely ideological terms due to the fact that the Trump plan allows for the theoretical creation of a Palestinian state, others have pointed out holes in the plan that in their view renders it unrealistic.

One of the complaints about the Trump plan is that despite the fact it incorporates all settlements into Israel, it does not go far enough because of the fifteen enclaves that the plan envisions. 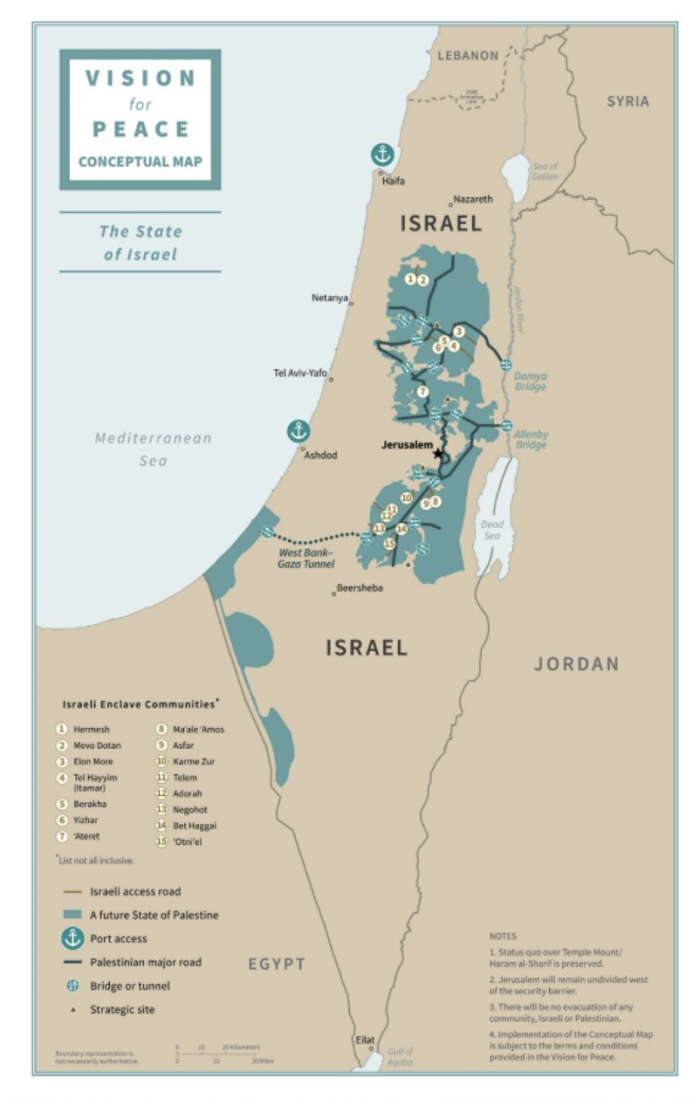 As some Yesha Council leaders have expressed, creating a series of disconnected enclaves guarantees that growth in those settlements will be choked off over time, leaving them to wither and die. Nobody will want to move to far-flung spots in the West Bank that are remote islands surrounded by a sea of Palestinians, and where the security situation will be particularly hairy. While those enclaves may technically be part of Israel after sovereignty is extended to them, the conditions in which they will exist makes them inherently unsustainable as viable entities.

Another issue raised by settler leaders is roads. If Israel annexes the 30% of the West Bank envisioned by the Trump plan and then freezes activity for four years in the remainder of the West Bank, it will make life far more inconvenient for Israelis who live beyond the large Green Line blocs. Getting to Jerusalem from south of Hebron, for instance, will require going southwest to Beersheva and then heading back north along the length of the entirety of the southern West Bank, as opposed to just heading directly north from the South Hebron Hills. Israelis living in the West Bank will add hours on to their transit time depending on where they are coming from and where they are going, and it will erode the connection between smaller settlement communities and Jerusalem specifically.

There are two elements in particular to note about these arguments. The first is that they are completely correct. The Trump plan does indeed contain a host of extremely unworkable arrangements predicated on a foundation of fantastic magical thinking that took no account of practicalities. The irony at work here is not that the arguments are wrong, but that they are the same arguments made by opponents of the Trump plan from the other side who pointed out the plan’s infeasibility from the moment it was released. Creating settlement enclaves will not only be a nightmare for those living in them, but for the Israeli government and the IDF in securing them. Pretending that a group of islands narrowly connected by isolated roads will provide the illusion that those living in them are inside of sovereign Israel is absurd on its face, no matter how misleadingly you draw a conceptual map. Asserting that doing this will improve the quality of life for the residents of those enclaves or for Israelis living in annexed fingers of land that cut deep into the West Bank just because you apply Israeli sovereignty and law to those places is nonsensical to anyone who has been to those spots or who has the ability to read a map. The settler leadership is demonstrating with its own concerns precisely why the Trump plan is, in fact, one of the more unrealistic solutions out there.

The second element to note is that the Trump plan’s opponents on the right are adopting many of the same arguments long made by two-state supporters in service of separation from the Palestinians and the creation of an independent Palestinian state. The reason that annexation of Area C, for instance, is unworkable to the extreme is because it creates not 15 islands, but 169 islands of Palestinian territory. It is hard to argue that creating a relatively small number of settlement enclaves will be disastrous for those living in them, and then credibly argue that creating ten times more Palestinian enclaves is a fair or reasonable outcome, or that doing so and calling it Palestinian autonomy is something that reasonable people should embrace.

If before the last few weeks you have ever heard a complaint about West Bank roads that take a circuitous route and add hours on to what was once a short commute, you almost certainly heard it from Palestinians who used to drive between Bethlehem and Ramallah in 45 minutes and now are unable to do it in less than two or three hours. Those complaints are often dismissed by those on the right as bellyaching, and objections to potential Israeli moves that cut off the northern West Bank from the southern West Bank – such as annexation of E-1 – are papered over with talk of bypass roads, tunnels, and “transportational contiguity.” It is in some ways refreshing to see some on the Israeli right now awaken to the fact that these are actual problems and not fictitious ones, though I am doubtful that there will be a widespread embrace of the same Palestinian concerns.

What this all does is reinforce the fact that if you are looking for realism, there is no way around support for the traditional two-state framework. It isn’t an easy or clean outcome, but it recognizes the basic truth that only real separation will allow both sides to fulfill their national aspirations in an administratively viable way. The Trump plan does not come close to doing this, instead opting to avoid any hard choices and pretending that what it proposes is ingenious out-of-the-box thinking. While I wouldn’t have anticipated the settler leadership as being the group that would be most effective in pointing out the absurdity of the Trump plan being described as realistic, we should thank them for it.